The Waalfront development lies to the west of the medieval city of Nijmegen. The site is special because of the presence of many historical layers of time. Ulpia Noviomagnus Batavorum, the first Roman settlement within the current national borders, was established here in about AD 200. Fort Krayenhof, a defence stronghold, was built on the project site in the early 19th century. In the early 20th century the site became a place of industry with, among others, the Honig and Nyma factories. In the new master plan drawn up by Waalfront Development Company, a joint venture between BPD and the Municipality of Nijmegen, the layers of time are revealed in an attractive and residential urban expansion.

The commission is for the design of three urban villas located in a public park beside the River Waal. The proposal, drawn up in close cooperation with Bureau Oslo landscape architects, comprises 42 spacious apartments in three building volumes, designed as ‘pavilions’ and set in greenery.

The pavilions are arranged like boulders along this fort wall, and together they form an ensemble in which views, orientation and privacy are optimally incorporated

The pavilions are identical but rotated and mirrored with respect to one another. As part of the park, the historical fort wall on the eastern side of the park is reconstructed in its original position, with a green canal serving as a flood retention basin. The pavilions are arranged like boulders along this fort wall, and together they form an ensemble in which views, orientation and privacy are optimally incorporated.

living in the park

The design of the pavilions is inspired by the diamond shape of the lunettes of the fort. Incorporated into the park, which slopes upwards towards the River Waal, is a half-underground car park that connects the pavilions. As a result, the pavilions are slightly raised from the park, which also ensures privacy on the ground floor. The entrances to the buildings are located at ground level, and are accessible from the park and from bridges across the green canal to the east.

The pavilions have five floors above ground, with the top two floors stepped back. A compact core provides access to three apartments on each level and two penthouses on the top floor. The roofs are covered in vegetation and PV panels.The pavilion-like character is expressed by the loose composition of three buildings set in green surroundings and the theme of the second skin which, like a fragile veil composed of slender columns, determines the appearance. To further accentuate the lightness of the pavilions, the greenery in the park meets the building slightly lower so that the floor bands at ground-floor level seem to float slightly above ground level.

The thermal skin folds inwards at the enclosed outdoor spaces, while the outer skin continues to follow the contour of the building. The rhythm of the facade columns increases and decreases in response to the blank expanses of facade behind, the windows that can open, and the recessed balconies. The thermal skin is covered with stone-like floor-high panels in a light-green tone, with a subtle vertical profile that follows the same rhythm as the outer skin. The development of the park and the pavilions forms an important element in the development of the Waalfront Master Plan, and the new park beside the River Waal.

The thermal skin folds inwards at the enclosed outdoor spaces, while the outer skin continues to follow the contour of the building 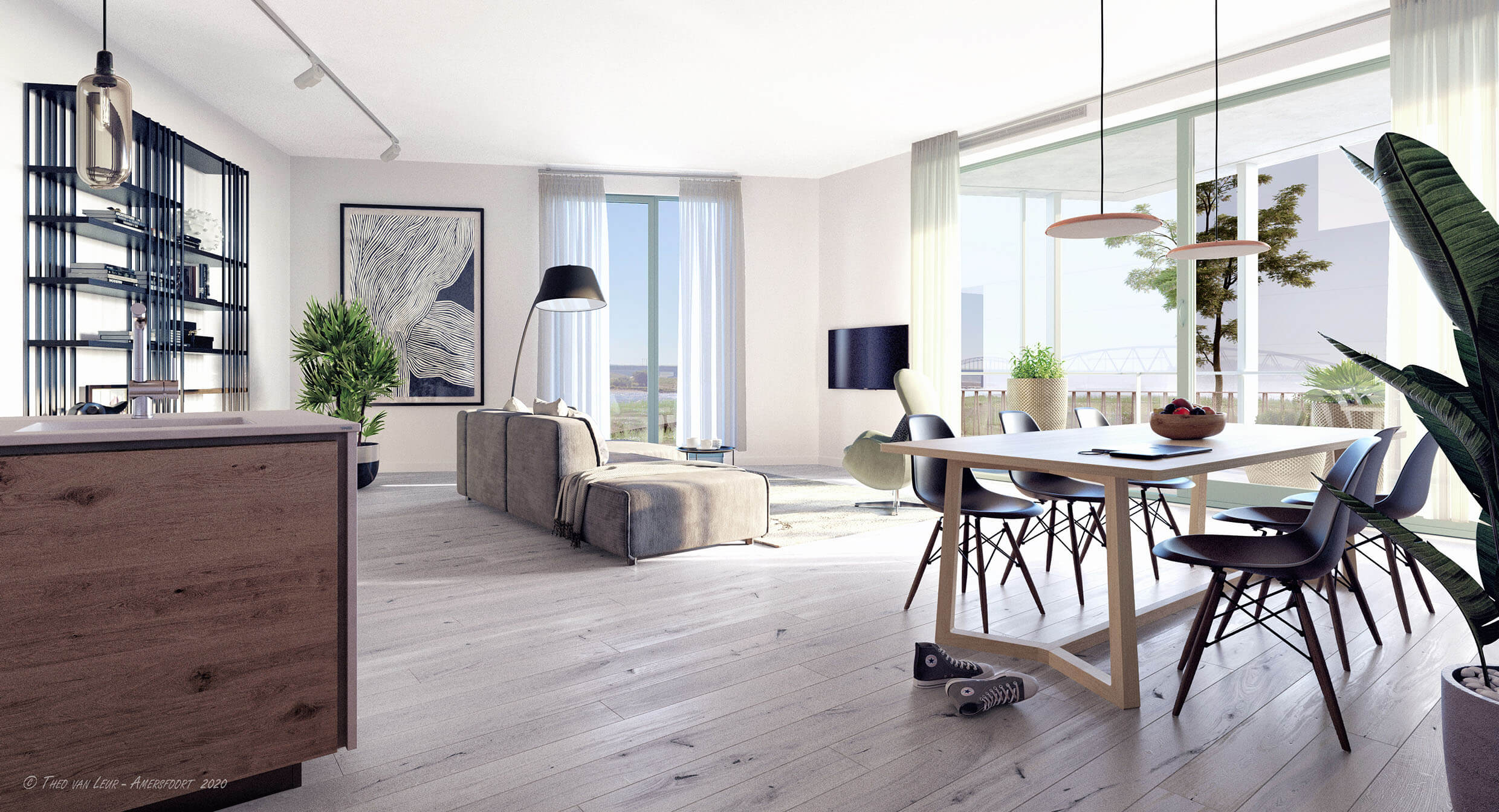 Due to their positioning in the Fort Krayenhoff park, the three pavilions offer an unobstructed view of the greenery and the Waal. Nature-inclusive measures such as the integration of nesting stones for bats and birds in the fortress wall increase park-like living.