back to overview
main facade

The future of a building can be very uncertain. At the beginning of the 21st century the former PTT Telecom building in the centre of Rotterdam was set for demolition. As part of the post-war development of Rotterdam city centre, it was still not a very old structure.

In 1951 the telecom company moved into the new building, designed during the Second World War by municipal architect J. Koops. The building was designed up as an urban block, consisting of two parallel wings more or less identical in size. An office wing on Botersloot, the representative side of the plot at the time, was combined with an industrial wing full of telecom equipment at the back of the complex, facing the railway. But by the end of 1990 the surrounding area had changed significantly. The railway viaduct had been replaced by a tunnel with a new market square on top, and several neighbouring buildings were demolished and replaced by new ones.

A similar fate awaited the PTT Telecom building, whose rear side faced the square. But the building miraculously survived owing to an unfeasible redevelopment scheme and public objections to its demolition. It then remained vacant for several years, its future use uncertain. With the disappearance of the railway viaduct and the creation of the new market square, the back side became more prominent and key to the building’s redesignation.

Floor heights of almost 4.5 metres give the apartments an exceptionally spacious feel with a wonderful view of the metropolitan cityscape of Rotterdam 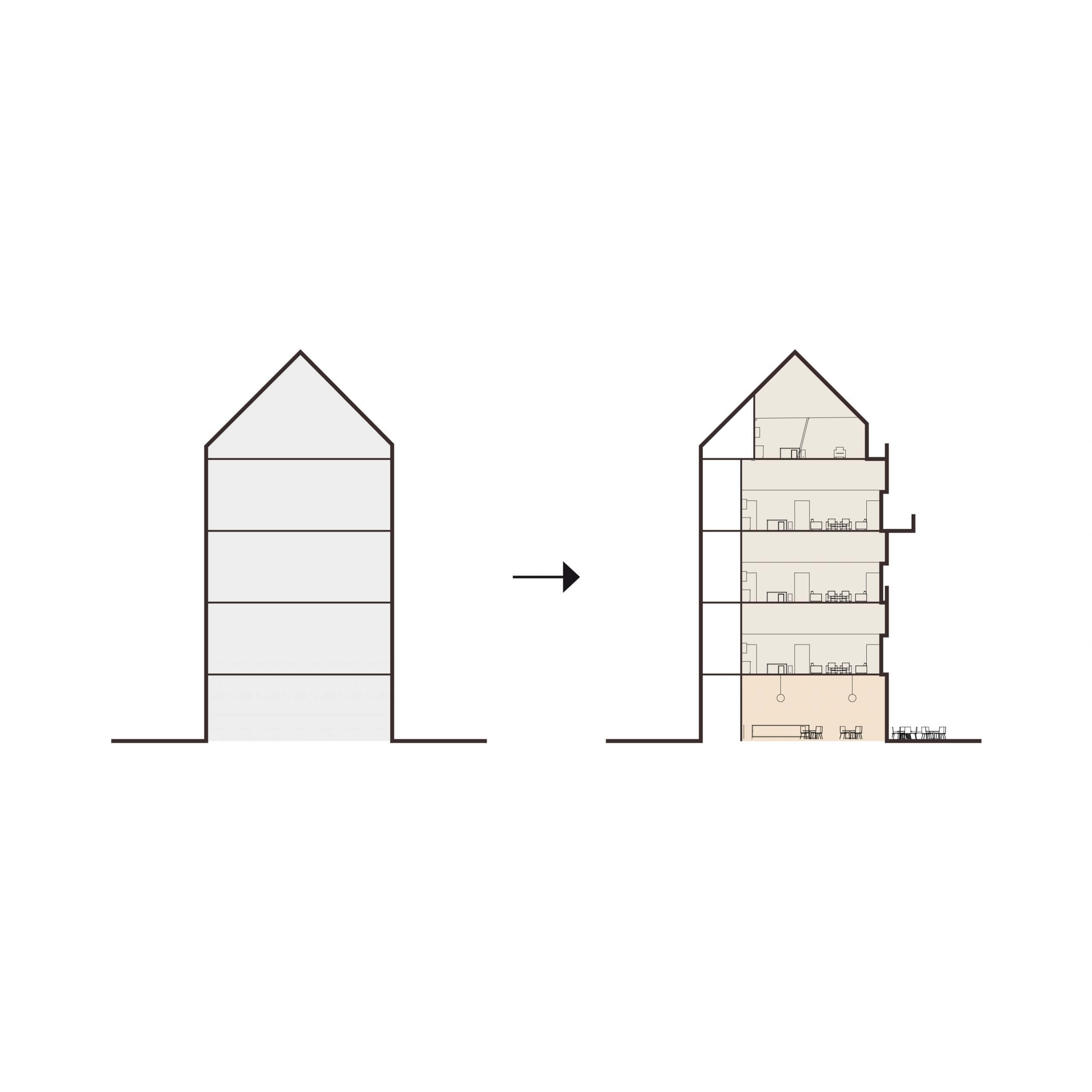 In 2016, after lying vacant for almost a decade, Orange Architects was commissioned to carry out a study for a residential programme in the industrial wing of the building, with a public facility in the plinth. The design comprises twenty studio apartments slotted into the generously dimensioned concrete structure, with floor heights of almost 4.5 metres. A restaurant at ground level ensures liveliness on the street.

To accommodate the apartments several interventions, including a new entrance lobby, an elevator and a wooden stairwell, were made to ensure comfortable living conditions in the former industrial structure. Apart from internal alterations, opening up the former rear side and south-facing façade was a large part of the transformation. 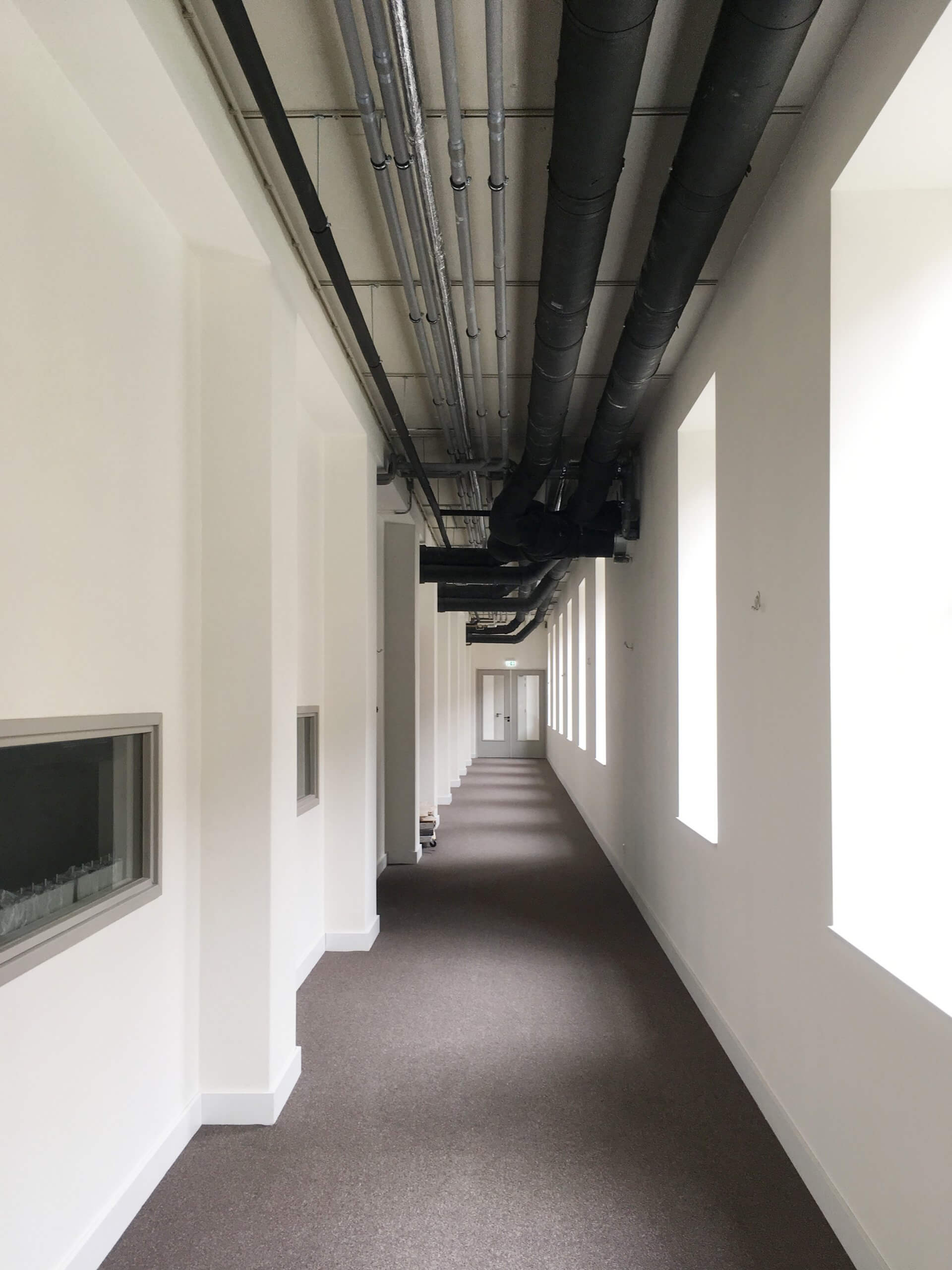 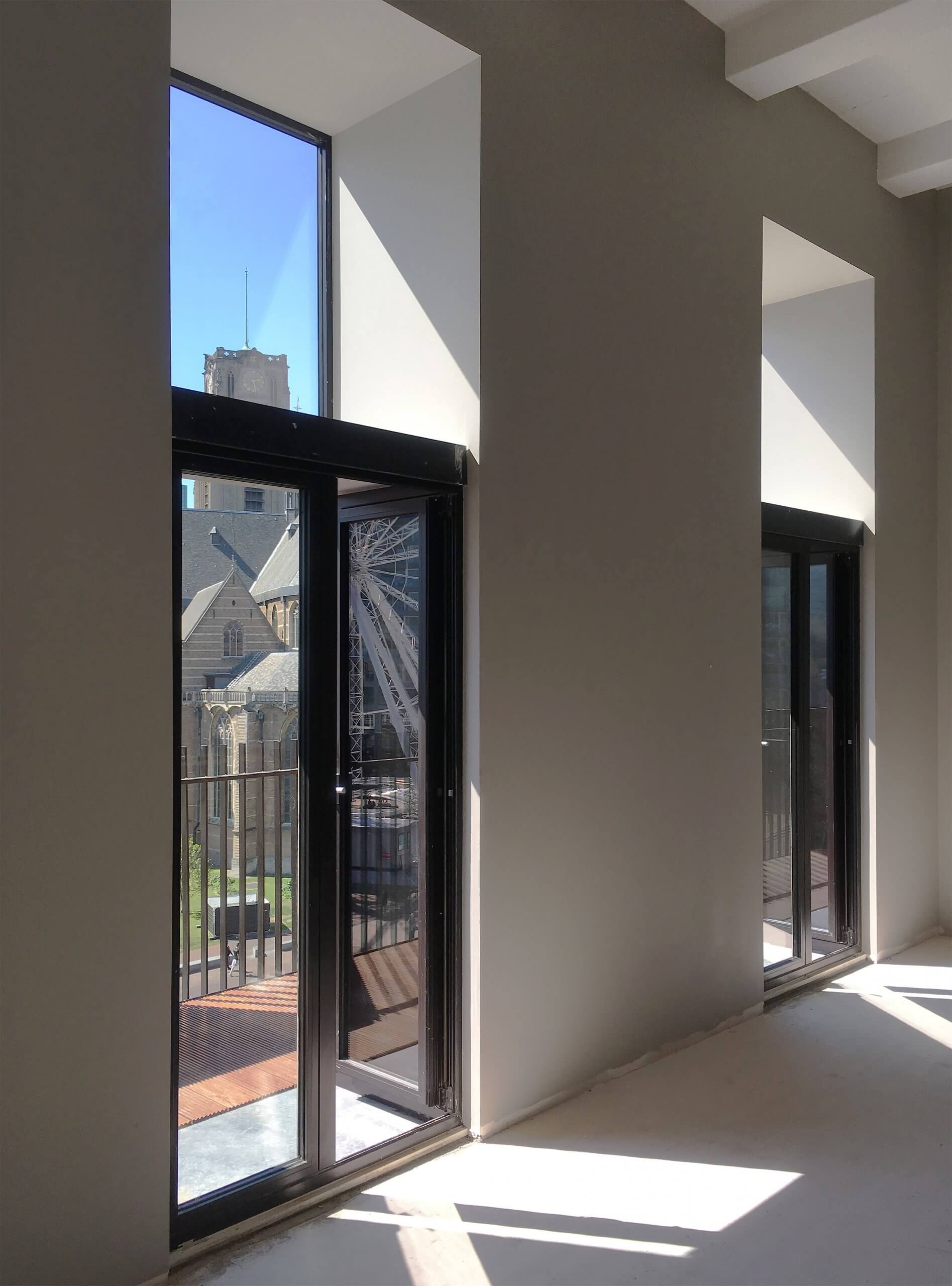 The existing masonry was cleaned and kept in sight and the building was insulated from the inside. All window frames were renewed, while several window openings were enlarged by surgical interventions and replaced with recessed French balcony doors topped by panoptic windows. A long balcony on the third floor adds a three-dimensional twist to the previously rigid window pattern and the apartments on the roof level all got loggias.

The ceramic roof tiles on the south side have been replaced by glazed solar slates in a neutral, dark colour. As a result, they are practically invisible, preserving the high-quality aesthetic appearance of the roof. The energy concept has been customized for this building. Residual heat from the telecom equipment in the basement is used to preheat the tap water and the floors in the apartments and restaurant. Water is also heated with solar boilers on the flat roof at the rear of the building. The building is heated and cooled with electric heat pumps. Enough energy is generated to supply the needs of almost all apartments and some of the restaurant.

Carefully designed additions with metal cladding were applied to create new entrances and to emphasize the new façade incisions. Openings at ground level were enlarged to connect the restaurant directly to its adjacent terrace on the market square. The reused stone around these openings appears as if it has always been there. New black-brown metal elements interact with the existing red-brown brick façades, confirming the building’s new role in the city and allowing the second life of the building to manifest itself as a new architectural layer.

Now that the transformation has been completed, and the building has been inhabited for around 1.5 years, it is really great to see this once dead spot in the heart of Rotterdam come back to life. Public programmes enliven the plinth, people occupy the adjacent terraces, and apartments and outside spaces are intensively used. Reusing and enhancing what was already there has radically transformed the building and surroundings from a dark, neglected and isolated corner of the market square into a vibrant city-centre space. In this way the project underlines the new Rotterdam attitude towards transforming and maintaining existing buildings, an attitude that has increasingly evolved over the past decade from demolishing and replacing buildings to transforming and reusing them instead.